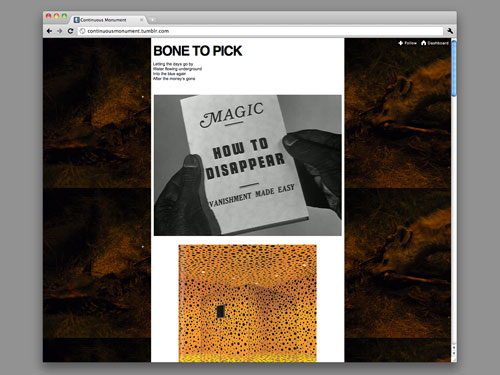 The description below used to be accurate.

But, lately, I've mostly been posting my own photos. Indeed, it's pretty much just a Los Angeles photo blog now. Nothing wrong with that.

My technique is far from perfect.

Every fifteen-year-old has a Tumblr blog.

On it, they post one of two things. First, they might post their own photography. And their photography is good. And it might make you cry - just a little - because the de-professionalization of the arts wasn't supposed to happen this fast. But there it is: great photography, by some girl in Sweden (who's fifteen), on the internet. And it might be a little self-absorbed, maybe a little too Cindy Sherman-esque or uncomfortably post-Myspace-ish. Yes, okay, her work needs to ripen a bit. Sure. But it is beautiful, in a way only someone who is fifteen can really achieve: without filter, pure, raw, hormonal, a bit gauzy but in a good way, innocent. And perfect in technique. She used Photoshop before she could read and write.

Or, if not their own achingly beautiful creative endeavors, they are posting and reposting an endless stream of images, quotes, quotes layered on top of images, songs, videos, movie stills, and more images. "Inspiration." It is really about fashioning an aesthetic cosmology. Emphasis, perhaps, on the fashion.

That latter one, that's what is happening here. It is kinda dumb, I think. Yes. There is really no defense. But I started it because I wanted a place where I could participate in some of the social linking inherent in Tumblr that I couldn't do with [the current blog-form of] Nat'l Bag, because I only post videos and songs to that. The ultimate - and admittedly slightly crass - hope being that, through tactical cross-reblogging, one could feed followers to the other.

Frankly, it takes a lot time and I don't foresee this being a project that moves too far forward. My engagement with social media has always been hesitant, at best. Generally, it just feels creepy to me and, given my half-hearted attempts, rarely proves of much practical use. As an aesthetic medium, again, I don't do it well enough to deploy it meaningfully. Ultimately, I am probably just too old.

I do, however, find it amusing to insert in my stream theory quotations that obliquely question the aesthetics of the Tumblr form. Those, however, are no doubt lost on whatever fifteen-year-olds might be paying attention.

(I am nothing if not a grumpy old man. Now get off my lawn.)