As I've said before, I am interested in the somewhat devalued concept of beauty. But not visual beauty -- which is, anyway, to be found pretty much everywhere, if one is looking -- but situational beauty. There is a beauty in making things happen, in projects that can be a catalyst.

For the beginning of the new school year, a classmate and I decided to throw a party to help students in the Writing Program get to know each other better. To facilitate that process I developed this project. Much as Blood Will Flow was in many ways like a physical substantiation of a Napster-like file sharing situation, ’ster was very explicitly a realization of a social networking website, specifically Friendster (which was the popular one at the time), in real space. I created a questionnaire which asked students for information similar to what one finds on social networking sites, though slightly tailored to the specific situation. I then gathered people's information, took their picture, and created profile sheets which were pinned to bulletin boards in the gallery.

The exciting thing for me was how well it worked. I initially had some trouble getting people to fill out the questionnaires. It seemed that people familiar with Friendster immediately "got it" and participated. Less internet-savvy people were more skeptical. But once the profiles were posted in the space and the party started, everyone was reading everyone else's profiles, it did start conversations and forge bonds -- and the people who hadn't previously participated mostly decided to finally fill out a profile on the spot and join in.

An abiding interest of mine is the relationship between conventional forms and social conventions. It is obvious that social relations develop their own formal arrangements, and vice versa. A literate public gives rise to newspapers; newspapers give rise to an audience. The social networking profile (though not quite new, having developed out of personal ad profiles) gives rise to a new kind of social relationship, one that can play out as much in real space as in a virtual one. 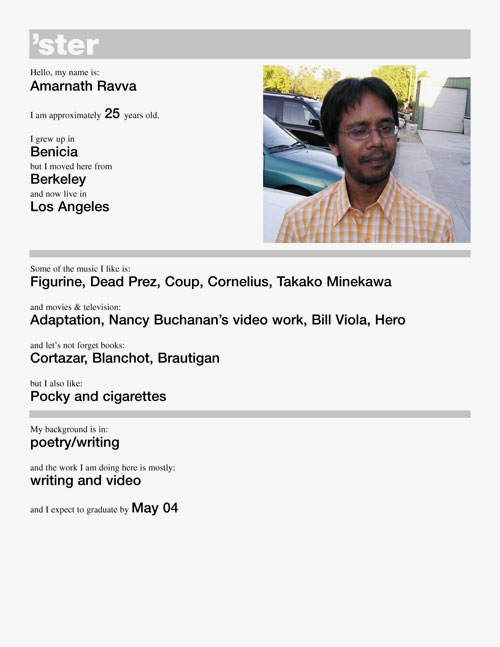 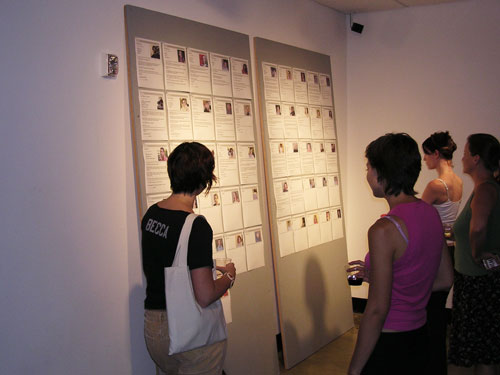